The MicroVice sample holder provides a unique solution for placing and holding your samples for analysis with IR, Raman microscopes, stereoscopes and light microscopes.  Individually shaped samples, such as minerals, tablets and pills, but also multilayer films, fibers, hair samples can be easily positioned and analyzed in the desired position. It may tilt the sample for correcting oblique sample orientation and may also be used to stretch fibers and polymer films. It is customized to fit stages of various microscope manufacturers. 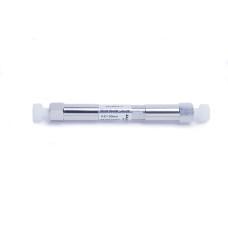 During HPLC analysis, especially in gradient elution or after long time system usage, some unexpected peaks called "Ghost Peaks" may appear in the chromatogram, particularly when UV-vis or PDA detector are used.  These Ghost peaks can interfere the data interpretation and analysis.  Welch Materials original Ghost-Buster Column I can capture ghost peaks, but sometimes it comes with baseline fluctuation. This can affect the integration of some peaks.  Ghost-Buster Column II is a new product upgraded from the version I of Ghost-Buster Column.  It can remove impurities of low polarity and prevent interferences from different kinds of ghost peaks.  It can also resolve the baseline drift caused by the excessive initial proportion of aqueous phase in the gradient program. 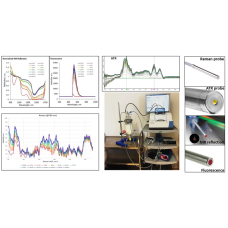 Milk and dairy products are a widely produced and traded source of nutrition globally. The main goal of the quality control is to provide accurate and reproducible information about the product quality and safety in real time during industrial preparation process.  Spectroscopic methods including Infrared spectroscopy, Raman, reflectance, and fluorescence, are attractive alternatives for traditional analytical methods due to the non-destructive nature, little sample preparation, rapid analysis, minimizing of the use of hazardous solvents. 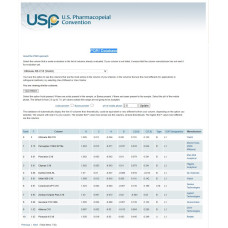 The Product Quality Research Institute (PQRI) was established in 1999, and brings together members of the pharmaceutical industry, academia and regulatory agencies to develop science-based approaches to regulation. The PQRI column database was created for scientists to find similar HPLC columns that can replace the original column for their works. PQRI approach for selecting columns of equivalent selectivity is based on five column properties (hydrophobicity “H”; Column steric interaction “S”; Column hydrogen-bond acidity “A”; Column hydrogen-bond basicity “B”; Column ion-exchange capacity “C”).  Welch has 19 column phases from 3 categories ( Xtimate, Ultisil and Topsil) listed in this database ( see Table 1). In this database, one enters the original column and the database will list similar columns of equivalent selectivity.

Peristaltic pumps are typically used to pump sterile or aggressive fluids without exposing those fluids to contamination from exposed pump components. They are self-priming, reversible and highly reliable.  Also, peristaltic pumps are suitable for applications where isolation of the product from environment is critical, such as pumping abrasives, corrosive or/and viscous fluids.  There are a wide variety of applications of peristaltic pumps listed but not limited:  Medicine:  Dialysis machine/medical infusion pumps, blood transfusion ; Testing and research: Auto-analyzer , analytical chemistry experiments, media dispensers;  Chemical handling: Pharmaceutical production, dosing systems etc. 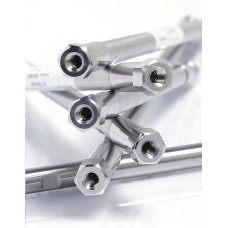 Chromatography is a laboratory technique commonly used for the separation of a mixture. The mixture is dissolved in a fluid called the mobile phase, which carries it through a structure holding another material called the stationary phase. Column chromatography is a separation technique in which the stationary bed is within a tube.  Thus, the column used in this analytical method is the heart of the chromatographic system.  Common requirements for columns include high column efficiency, good selectivity and fast analysis speed etc.  Packing materials for HPLC are mainly all porous spherical silica gel, organic polymer matrix or core-shell silica gel. Their particle sizes, for instance, 1.8 µm, 3 µm, 5 µm, 7 µm and 10 µm are available. The selection of columns,  and classification and main features of packaging materials are described herein. 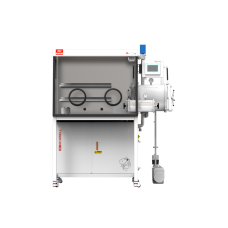 Air sensitive materials such as metal hydrides, metal halides, metal alkyls and aryls, metalloids have applications in a number of chemical processes,  such as certain catalysts, OLED (organic light-emitting diode) applications, inert gas welding, lithium-ion battery applications, and semiconductors.  Because these materials can react, oxidize, or even explode when exposing to oxygen and moisture, it is critical to isolate them in an air-free environment.  For example, glove boxes filled or purged with an inert gas such as nitrogen or argon gas offer a sealed environment that allows users to manipulate or handle these air sensitive materials (Figure 1).  Both chemicals and equipment can be transferred in and out via the antechamber. 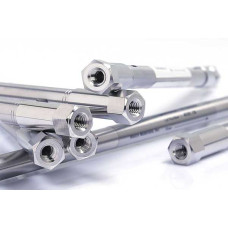 HPLC Analysis of Aldehydes and Ketones in Air Samples

Aldehydes and ketones from industrial and automotive emission can pollute the environment.  Also, as a lot of these compounds are carcinogens, several US EPA and state methods have been developed for their analysis in air and drinking water.  This application note describes a HPLC method to analyze 15 commonly analyzed aldehydes and ketones in environmental air and auto exhaust.  Prior to analysis, aldehydes and ketones are converted to hydrazone derivatives when the air sample passes through a solid phase extraction (SPE) cartridge composed of silica gel coated with 2,4-dinitrophenylhydrazine (DNPH).  Then, the aldehyde/ketone DNPH derivatives are eluted from the SPE cartridge and analyzed by HPLC separation using a Uitisil® XB-C18 column and UV detection at 360 nm. 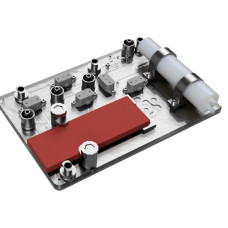 3D cell culture systems, such as organ-on-chip,  aim to revolutionize the drug development process. The 3D structure replicates the natural environment of cells. For example in human body, cells are supplied with nutrients and oxygen through the heart and blood vessels. Thus, in 3D cell culture models, this function can be performed by a microfluidics system.  In vitro experiments with 3D cell culture models can better simulate the body environment than conventional 2D cell culture experiments, thus help to accelerate drug development process and reduce cost and animal experiments as well.  Miniature valve from MEMETIS offers a variety of advantages in this cell culture application and other diagnostics applications, such as point-of-care and mobile health care. 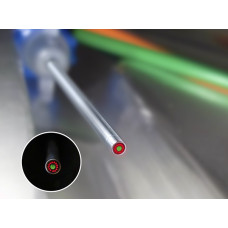 This article describes the basic principles of FTIR, Attenuated Total Reflection-Infrared Spectroscopy (ATR-IR), Fiber Optical Spectroscopy techniques and their applications in in-line reaction monitor and process control.  The design and selection of fiber coupler, fiber optical cable and fiber probe are briefly introduced.  This is the Part II.